To the widow of the man whose death saved Hitler's life

First edition, copy number 94 of an "edition de luxe" (Prachtausgabe) of 500 copies, signed by the author, each volume further inscribed, signed and dated by Hitler, to the widow of Max Erwin von Scheubner-Richter, the only first-tier Nazi leader to die in the 1923 Beer Hall Putsch, and whom Hitler later claimed to be "irreplaceable" (cf. Fest, Hitler, p. 201). Part I carries a printed dedication to Scheubner-Richter and the other fifteen men who died in the putsch, making this copy the de facto dedication copy. This edition, issued simultaneously with the first edition, apparently from the same setting of type, is printed on better quality paper, has the portrait frontispiece signed by hand, and is in a full vellum binding as opposed to the cloth and boards binding of the regular edition.

An early member of the Nazi Party, von Scheubner-Richter had, together with Alfred Rosenberg, devised the plan to drive the German government to revolution through the Beer Hall Putsch. In an exchange of fire during the Putsch, he was shot in the lungs and died instantly, bringing down Hitler, who had linked arms with him, in his fall. While Hitler dislocated his shoulder, the bullets aimed in his direction passed over his head: thus, Scheubner-Richter, through his own death, very likely saved Hitler's life.

Written in jail following the putsch, the importance of "Mein Kampf" cannot be overstated. Not only was it the origin and strength of the National Socialist programme transforming Hitler's status from a seedy local agitator to a potential national saviour in process, but more importantly caused a major turning point in the 20th century by setting the seeds for the most destructive war ever fought. Almost 40 when he started writing it, Hitler had achieved virtually nothing, but the book constituted a turning point in his career. "Political creeds as the basis for new religions have usually spelt danger for humanity. When they are distilled from the half-baked prejudices harboured by the more reactionary section of a nation not particularly noted for political enlightenment, they spell disaster" (PMM). In November 1923, Hitler was arrested after the unsuccessful Nazi putsch in Munich. When he said, later, that this defeat was the greatest stroke of luck he ever had, he meant that without it he could not have made himself into a popular hero. The trial became a social event, with photographers waiting outside the courtroom. For high treason he could not have been given a lower sentence - five years of imprisonment, with the possibility of parole after the first six months. As a prisoner in the Landsberg Fortress, he was given preferential treatment. It was here that he dictated the first volume of Mein Kampf to his associate Rudolf Hess. Just before Christmas 1924, he was released after serving only nine months of his sentence. The first volume sets out his highly tendentious opinions about the world he grew up in, and about the 1914-18 war. It presents his justification for territorial acquisitiveness - Germany needs more Lebensraum - and airs his anti-Semitism. "Although it contained much that was shocking to many Germans, its main sentiments were widely shared in central Europe. A pseudo-mystic racial theory, totally unrelated to fact, was made to support pan-Germanism, anti-Semitism, militarism and ultra-nationalism, the combination of which was to be implemented by the unrestricted use of power as interpreted through the mentality of a superstitious bully" (PMM). Entitled "The National Socialist Movement", volume II (1927) contains most of the ideas later fleshed out in his policies. "This programme, with a detailed account of what it would entail nationally and internationally, is stated with complete frankness in the two volumes of 'Mein Kampf'. The brazenness of the declaration was due to naivety and immaturity. Unfortunately Europe was governed by small men at the time and when Hitler came to power in 1933 he found that his wildest claims and most extravagant actions earned but mild and ineffectual rebuke. His enemies accepted the occupation of the Rhineland, the tearing-up of the Versailles and Locarno Treaties, the abandonment of the League of Nations and the seizure of Austria and Czechoslovakia. Hitler had a right to be surprised at their violent reaction to the attack on Poland. It was all in Mein Kampf, but they just could not believe it" (PMM).

A notable copy with a remarkable provenance. 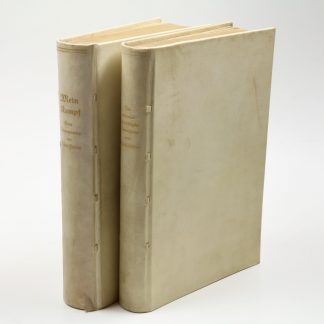