Terrorist periodical calling for the assassination of Tsar Nicholas II

First of only four published issues of this journal of the Russian socialist revolutionary movement "Narodnaia Volia" (People's Will), perhaps best known for its affirmation of political terrorism and the successful assassination of Tsar Alexander II in 1881. The journal was published by Vladimir Burtsev (1862-1942), a Russian revolutionary activist and publisher. Quite scandalously, the first issue openly reprimands the organization for failing to resist the Russian government and calls for assassinating Nicholas II. In 1898, Burtsev was arrested by British authorities based on this publication and sentenced to 18 months of hard labour. Numbers 1-3 were published in London in 1897; no. 4 followed in Geneva in 1903, for which Burtsev was deported and forever banned from the country. This issue also reproduces the photographs of two terrorists who unsuccessfully conspired to assassinate Alexander III in 1889 and had since died (Isaak Dembo and Sofia Ginsburg). Burtsev would later oppose the Bolsheviks after returning to Russia, and eventually he was arrested. Gorky secured his release and Burtsev once again fled Russia. He became an outspoken activist against both Soviet antisemitism as well as the fascist movements of the 1930s.

Traces of stamp and slight loss to upper right corner of front wrapper. Spine strip somewhat fragile; internally very good. From the famous collection of Socialistica of Marxist bibliophile and scholar Chimen Abramsky (1916-2010), who fled to London from the Soviet Union in the early 1930s and became a leading specialist in both Judaica and socialist thought. His enormous collection, parts of which were auctioned after his death, has recently been commemorated in his son's biography, The House of Twenty Thousand Books (2014). 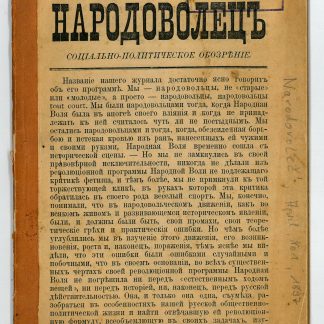