Eleven consecutive issues of this extremely scarce Menshevik periodical published in Switzerland (in total, sixteen issues appeared). An important resource on the eventful year 1905, which saw both the Russo-Japanese War and the revolutionary upheaval in Russia, the journal contains politial articles, news reports, as well as original poetry by Russian political emigres, but also updates submitted by Russian revolutionary committees in the Russian Empire. The "Sotsial'demokrat" was edited by Fyodor Ilyich Gurvich (1871-1947, pseudonym "Dan"), a leading Menshevik theorist. In 1917, Gurvich joined the Petrograd Soviet; in 1922 he was expelled from the Soviet Union.

Occasional stains and light discolorations; a few issues somewhat resized to lower edge; some issues still partly uncut. From the famous collection of the Marxist bibliophile and scholar Chimen Abramsky (1916-2010), who fled to London from the Soviet Union in the early 1930s and became a leading specialist in both Judaica and socialist thinking. His enormous collection, parts of which were auctioned after his death, has recently been commemorated in his son's biography, "The House of Twenty Thousand Books" (2014). 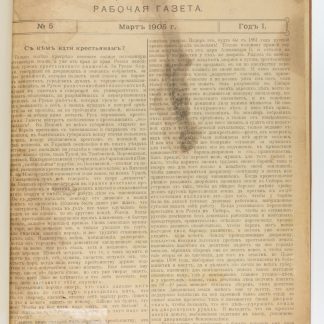