The first publication signed by Ulyanov as "Lenin"

Three of only four issues (in two volumes) of the "Dawn", an extremely uncommon journal of revolutionary Marxism edited by the Iskra group in Stuttgart. Here Vladimir Ulyanov famously first used the pseudonym "Lenin" to sign a published article (he had begun to use the pseudonym in letters in 1901).

Issue no. 1 contains an article "Sluchainyi zametki" (Random observations) signed by the earlier pseudonym "T. Kh", which he also used for two articles in issue no. 2-3. The third long article, "The Agrarian Question and the 'Critics of Marx'" ("Gg. 'kritiki' v agrarnom voprose") is signed "Lenin". The journal propagated the ideas of revolutionary Marxism and criticized the Narodniks and other more moderate movements. Among the leading contributors were G. Plekhanov, Z. Zasulich, P. Aksel'rod, Iu. Martov, A. Potresov and others.

Issue no. 1 also contains a translation of the memoirs of Karl Kautsky. Also included is a four-page pamphlet (single folded leaf) about a dispute within the editorial team, entitled "Kto vydumal plokhuiu vydumku' ("Who thought up the bad idea?"), written by the economist and philosopher Boris N. Krichevskii (1866-1919). Both volumes are from the famous collection of the Marxist bibliophile and scholar Chimen Abramsky (1916-2010), who fled to London from the Soviet Union in the early 1930s and became a leading specialist in both Judaica and socialist thinking. His collection, parts of which were auctioned after his death, has recently been commemorated in his son's biography, "The House of Twenty Thousand Books" (2014).

Bookplate of the London School of Economics, with withdrawal stamp and Chimen Abramsky's hand-written note inside front wrapper, noting that he exchanged these volumes in 1970. No. 1 one lacks the final leaf. Very scarce in the trade. 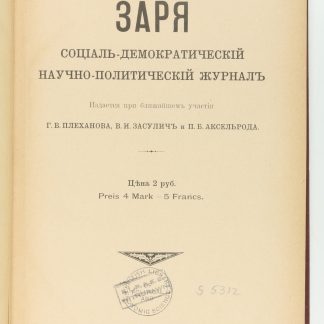