"a pivotal work in Karl Marx's intellectual and political development"

First Russian edition of Marx's "Misère de la philosophie", which was written as a comment on "The System of Economic Contradictions, or the Philosophy of Poverty" ("Système des contradictions économiques ou philosophie de la misère", 1846) by the French anarchist Pierre-Joseph Proudhon. "Numerous commentators in the Marxist tradition recognize 'The Poverty of Philosophy' as a pivotal work in Karl Marx's intellectual and political development. Shortly after it was published in July 1847, Frederick Engels hailed it as the basis of 'our programme', a necessary theoretical guide to any platform of an emerging proletarian party" (Roberto).

The present edition was published by the Gruppa Osvobozhdenie Truda (Association for the Emancipation of Labour), the first Russian-language Marxist political organization, based in Geneva. The group was very active in translating, publishing Marxist works in Russian and distributing them.

Spine split. Traces of earlier side-stitching, but lacking the threads, hence many loose leaves. Right corner torn off from the head of the wrapper. Some minor browning in the lower margins and a tiny hole in the title page, but with the text generally sound. 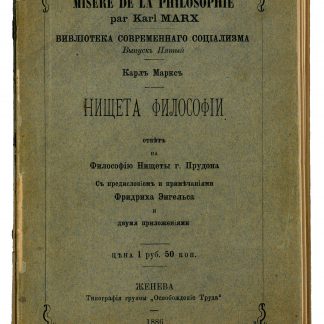