A Scotsman in Qajar Persia

Binning (1814-91) enjoyed a career as an administrator in the East India Company Service in Madras. He travelled in the Cape of Good Hope and in Syria, Palestine, Arabia and Egypt in 1845-1847, but had to quit his post for health reasons in 1850. For the next two years he travelled again, in Ceylon and Persia, which he described in the present "Journal". After Ceylon the author travelled from India to Bushire by way of the Gulf, and made the return trip by the same route. An enthusiastic linguist in Arabic, Persian and Hindi, Binning collected historic manuscripts and other examples of the use of these languages, and published an Arabic grammar in 1849. He assembled a collection of about 140 oriental manuscripts, which he presented to two Edinburgh institutions in 1877. 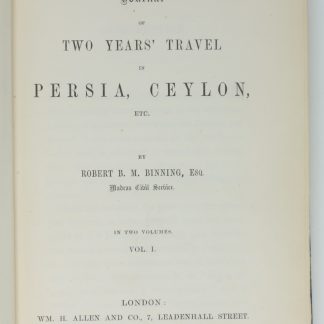