First edition, first impression of what is generally considered the author's magnum opus, the book widely credited with creating the terminology and shape of modern macroeconomics. One of the iconic books in the development of economic thought by one of the outstanding economists of his generation. "The composition of this book", Keynes declares, "has been for the author a long struggle of escape, and so must the reading of it be for most readers if the author's assault upon them is to be successful, - a struggle of escape from habitual modes of thought and expression. The ideas which are here expressed so laboriously are extremely simple and should be obvious. The difficulty lies, not in the new ideas, but in escaping from the old ones, which ramify, for those brought up as most of us have been, into every corner of our minds" (Preface, p. VIII). "In 1936, although Roosevelt's 'New Deal' had utilized Keynesian prescriptions, 'The General Theory' ('on which', says the DNB, 'his fame as the outstanding economist of his generation must rest') threw the economists of the world into two violently opposed camps. Yet eight years later Keynes was to dominate the international conference at Bretton Woods, out of which came the International Monetary Fund and the World Bank; and his influence during the ensuing decades, even on his theoretical opponents, has been such that a highly placed American official recently remarked that 'we are all Keynesians today'" (PMM).

Very light discoloration to the upper margin (ca 3 cm) of the front side. A fine copy. 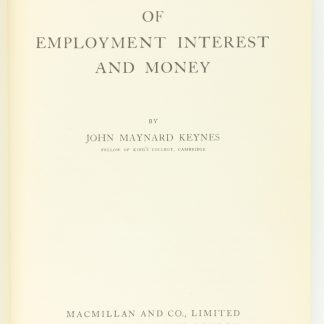