The argument for government ownership of railroads

Launhardt began his career as a civil engineer, later becoming professor at the Technical University in Hanover and its first rector. A specialist in the technology and economics of road and railway transportation, he gradually applied his insights to the more general problems of transportation networks. His fame as an economist is chiefly based upon his "Mathematische Begründung der Volkswirthschaftslehre" (1885), which gave Launhardt a prominent place in the history of economic analysis. His work is characterized as "Germany's most important and in fact only significant contribution to the 'marginal revolution' in the last three decades of the 19th century. In the economic analysis of transportation and location, this contribution was not surpassed until the 1930s. Available only in German, some of it in publications that are hard to find, it still has not found the recognition it deserves, and Schumpeter's references [...] are inadequate" (New Palgrave).

The present work on the "theory of network planning" consists of two parts: the first, on "commercial network planning", is a much revised and enlarged version of an earlier publication ("Kommercielle Tracirung der Verkehrwege", 1872), containing the derivation of efficiency criteria without regard to topography. The second part, on "technical network planning for railroads", applies economic efficiency criteria to curves and gradients imposed by topography. "The contributions to economics are found in Part I. This begins with a discussion of investment criteria. From a social point of view, networks should be planned in such a way that the sum of operating and capital costs is a minimum. Private capitalists, however, try to maximize the internal rate of return on their capital. Under perfect competition the two criteria would coincide, since the internal rate of return, if duly maximized, would equal the market rate of interest. In reality, however, since the railroad industry is inherently non-competetive, rates of return can be pushed above market rates of interest by keeping railroad investment below the social optimum. This was one of Launhardt's basic arguments for government ownership of railroads" (ibid.). 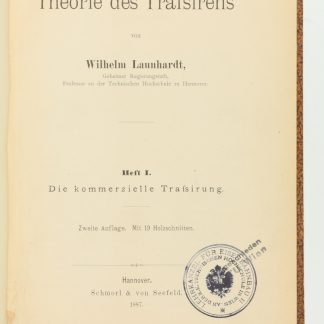