One of the earliest monuments of Islamic cartography

One of the earliest monuments of Islamic cartography, of outstanding rarity: published at roughly the same time as the famous "Cedid Atlas", also by the Imperial Engineering School in Scutari (Istanbul), this large-scale engraved wall map shows the "Northern Territories of the Ottoman Empire". This hitherto practically unknown map is clearly to be viewed in connection with the atlas which has long been considered the first and most important achievement of modern Muslim cartography. Like the Cedid Atlas, this outstanding publishing venture was commissioned under the authority of Sultan Sultan Selim III. A pioneering attempt at mapping a substantial part of the far-flung Empire, the map reaches from southern Italy and the Balkans to the Caucasus and the Caspian Sea. The most detailed map of the Empire's Northern Territories available at the time and one of the first wall maps printed in Constantinople. 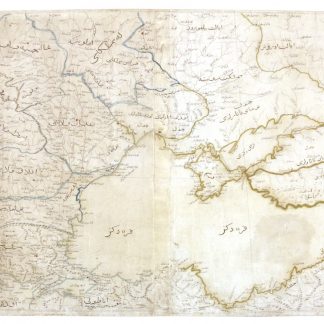