Prepared on behalf of the Admiralty and the War Office for official use only, this Handbook gives an account of conditions in Mesopotamia (Iraq) for the most part as they were before the First World War. These volumes cover the boundaries and physical features of Iraq, its minerals, climate, fauna, administration, transport, irrigation, religion and agriculture. The Naval Intelligence Division (NID) was the intelligence arm of the British Admiralty before the establishment of a unified Defence Intelligence Staff in 1965. It dealt with matters concerning British naval plans and the collection of naval intelligence. 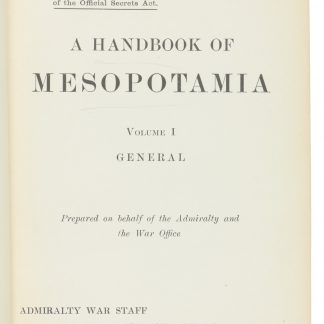