First edition of the "foundation of modern international law" (PMM). A prodigy in his youth, Grotius became a statesman and thinker of the greatest integrity whose influence on modern European thought can scarcely be overestimated. In 1619, cutting short a successful career in the law and diplomacy, Grotius was sentenced to life imprisonment in the Louvestein fortress in Holland by order of the stadtholder, Prince Maurice of Nassau, for having attempted to orchestrate a compromise between the Calvinist and anti-Spanish party, led by Maurice, and the more moderate Remonstrant party, who advocated self-government of the Dutch states in matters of religion. After a dramatic escape two years later (his wife smuggled him out of jail in a book trunk), Grotius took refuge in France, where he survived on meagre pensions, settling in 1623 in the country house of the President de Meme near Senlis, close to the property of de Thou fils, who gave him free access to his father's splendid library. There Grotius began writing his master work, "De jure belli ac pacis". Many of the ideas developed therein had been outlined in an unpublished work of his youth, "De jure praedae", the manuscript of which he had brought with him, enabling him to finish the treatise in under a year. The fundamental importance of the mature work is its attempt, a century before the spread of the Enlightenment, "to obtain a principle of right, and a basis for society and government, outside the church or the Bible" (M. Pattison, art. "Grotius", Enc. Brit. 1911, v. 12, p. 623). "The distinction between religion and morality is not clearly made, but Grotius' principle of an immutable law, which God can no more alter than a mathematical axiom, was the first expression of the 'droit naturel', the natural law which exercised the great political theorists of the eighteenth century, and is the foundation of modern international law" (PMM).

Buon commenced printing the work in November 1624. By using two or three presses, a few copies, presumably of the first state (Ter Meulen/D., p. 565), were ready to be sent to the Frankfurt fair in March 1625. This first state (of which Ter Meulen and Diermanse record only one copy, at the Bodleian) contains no table, indices, addenda or errata; all but the errata were added, constituting a second state (Ter Meulen/D. 565'), copies of which are also extremely rare, as it appears not to have been published. Both first and second states contain substantive textual variants, principally in bifolium 3Q2.3 and in quires 5E-5G, which were modified under the author's supervision, probably in the course of printing, forming a third and final state. While 3Q2.3 appear to have been entirely re-typeset, other corrections or revisions, according to Grotius's bibliographers, appear erratically in different copies. States II and III have title in red and black, in both, book 3, ch. 24 begins on p. 781 and text ends on p. 786, and both are complete, except that state II lacks the errata. Our copy conforms to state III, with the following points present: mis-signing 3 as o3 and 3C2 as 3C3, misprinting of p. 212 as 213, 407 as 707, 410 as 41, 456 as 458, 492 as 462; gathering 3C2 (pp. 385/386-391/392) has double page numbering to fill up the count preceding 393 on 3D1r; that sequence continues through 464 (3M4v), then reverts to the actual count beginning with 461 on 3N1r. Book 3 begins on leaf 4A1r (p. 553), as if preceded by A-3Z? (which would end with p. 552), indicating that its printing was begun before completion of the preceding text. State III leaves 3Q2-3 (p. 487-490) are a resetting of states I and II, with incorrect headline "LIB. III" on p. 489 (perhaps an unmodified re-used headline from book 3), though it has not been determined whether the inner bifolium 3Q2.3 only, or the whole of 3Q, was reprinted. 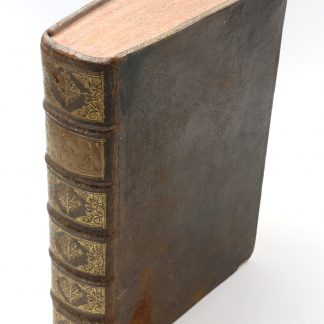