Folio (220 x 324 m). (10), XVIII, CXX ff. With full-page woodcut by an anonymous artist of the arms of the castle and of the city of Nuremberg, held by an angel, surmounted by the imperial arms and flanked by saints Sebald and Lawrence, finely coloured by a contemporary hand; large woodcut initial opening the text. Contemporary blindstamped calf over wooden boards.

Extremely rare printing of the laws and statutes of Nuremberg, compiled in 1479 and the first of any city to be printed, constituting "the most important and most influential" such collection of its era (cf. Stobbe). This is the second official edition (the fourth altogether), following Koberger's first printing of 1484 and two Augsburg reprints of 1488 and 1498. The fine woodcut by an anonymous Nuremberg artist is based on that of the first edition attributed to Michael Wolgemuth, the teacher of Dürer. The final chapter transcribes in its entirety the form of Jewish oath used in the medieval Nuremberg court. 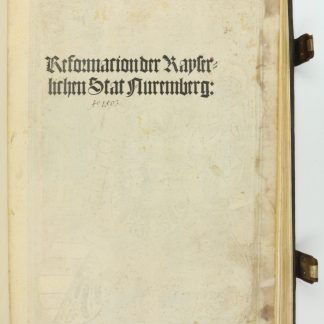