First and only printing. A treatise on the economy of the grain trade, one of the principal economic works of the 17th century. According to Van Rees, it contains "many pages whose content would have done honour to the writings of Turgot or Adam Smith". The first part collects all regulations concerning the grain trade in the Netherlands from 1501 to 1634. It is printed in double columns, with the text of the regulations and Graswinckel's Latin translation. The second part contains Graswinckel's commentary on the grain trade, with marginal notes in Latin. Graswinckel (1600-66) regarded agriculture as the country's principal source of wealth. He advocated free grain trade and high prices for agricultural products, wishing export restrictions to be kept to a minimum. He also fought other obstacles to free trade, such as prohibitions on buying future harvest (pre-purchase) and on sales without immediate delivery. Also, he proved shrewdly to have understood the causes of the 17th century grain price increase, which he linked to the influx of gold and silver from the West Indies. Schumpeter notes that while Graswinckel's insights were not new in 1651, he had a better understanding of the underlying price mechanisms, and that many would place him (with his contemporary Pieter de la Court) above his English contemporaries on the basis of his liberal views on domestic and foreign trade, finding that both writers should occupy a prominent position in a history of economic thought. This copy has the Dutch title; other copies, otherwise identical, bear the Latin one. Flyleaves, half-title and final leaves slightly frayed without loss of text. 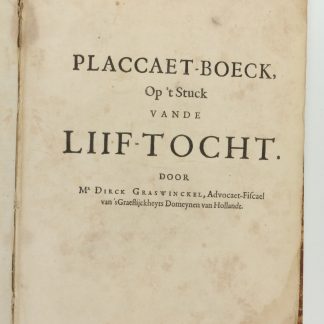