First edition. A plan for restoring the foreign trade of the Dutch Republic, in gradual decline since the beginning of the century, by means of the introduction of a limited free port. The actual plan is preceded by an extensive "Treatise on the commerce of the Republic of the United Netherlands", in which the causes of the (former) prosperity of the republic are investigated: natural and physical causes, moral and political causes (the wisdom and prudence of the administration), and external causes. "The substantial benefits resulting from religious toleration, political liberty, and the freedom of industry have seldom, indeed, been more clearly set forth than in this dissertation" (McCulloch). It is stated that the main cause of the decline of Dutch commerce, so obvious after the Peace of Aix-la-Chapelle of 1748, is the heavy tax burden. The plan includes the diminution of taxes by the introduction of a system of free port, though with some limitations. The proposal was presented by the stadtholder William IV, Prince of Orange (1711-51), to the States-General, who ordered that the report be printed. Though the title mentions the stadtholder only, it is a collective work whose authors included the prince's adviser De Larrey and the Amsterdam merchants Thomas Hope and Marselis. The prososals were not put into effect because of the high costs of the long wars.

Also published in English the same year as "Proposals made by the Prince of Orange for redressing and amending the trade of the Republic". Untrimmed copy with a few ink annotations by a contemporary hand. 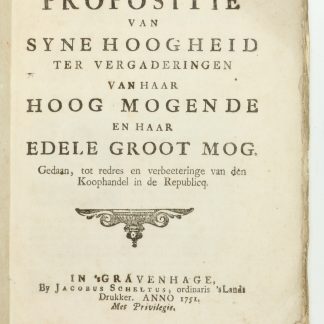