The principal medical writings of the German physician and oriental scholar Georg Hieronymus Welsch (1624-77), including his biography, published a year after his death. "The author [was] a learned German doctor and one of the earliest members of the 'Societas Naturae Curiosum'" (Duveen, p. 617). Welsch, the son of an Augsburg pharmacist, studied classical and oriental languages, philosophy and medicine in Tübingen, Strasbourg and Padua, during which time he visited Central Italy and Rome. He returned to Augsburg to practice medicine, but due to an illness (possibly a form of depression) he was unable to maintain a regular practice and instead shifted his efforts into the field of writing. A correspondent of Leibniz's, he is also remembered as a translator of Avicenna.

The "Sylloge", which had first appeared in the previous year, is an extensive collection of medical works by earlier writers, several here making their first appearance in print: treatises by Marcel Cumanus, Hieronymus Martius, Achilles Gasser (the supporter of Copernicus and Rheticus), Ulrich Rumler, and Hieronymus Reusner, as well as a another by Welsch himself. This is the second issue; although it ends with "Finis", it wants a final part (19, [8] pp.).

Bound with this is Welsch's massive two-part work "Consiliorum medicinalium" (a posthumous 1698 re-issue) and (with its own 1676 title-page and issued separately) "Exotericarum curationum". The first part contains four centuries of medical case studies, compiled and edited from manuscripts in the author's private library (including sources by Gasser, Rumler, Marquard Slegler, and many others). Welsch's knowledge of oriental medical science is evident from his copious learned footnotes, frequently quoting (in Arabic) the works of "Ebnsina" (Ibn Sina, Avicenna). It is also remarkable for its numerous engraved diagrams, still largely in an alchemical and astrological vein. The second part contains two thousand items of medical observations and cures, drawn from the same sources and similarly annotated by Welsch.

Prefixed to these is the Life of Welsch, written a year after his death by the respected Augsburg physician Lukas Schröck (1646-1730).

Some browning and brownstaining throughout as common due to paper, but well preserved. 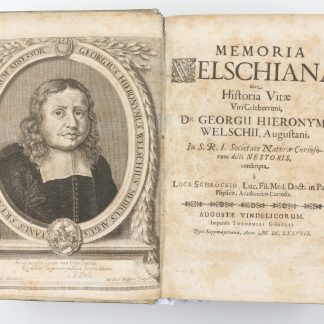