The Ship of Fools in contemporary calf

A fine, later Latin edition of the famous "Narrenschiff", originally published in German verse in 1494 and translated by the author's student Jacob Locher in 1497. This is the first edition to contain the outstanding narrative woodcuts by Tobias Stimmer (1539-84), showing the fools and their companions in Renaissance costume. The first six illustrations are coloured by a contemporary hand.

One of literature's most famous satires: before Goethe's "Werther" arrived on the scene, this work was the most successful book ever published in Germany. In his "Ship of Fools", Brant describes the voyage of a ship bearing one hundred fools, to the fools' paradise of Narragonia, thereby satirizing the follies of his time including representatives of every human and social type. "[T]he first original work by a German which passed into world literature [... it] helped to blaze the trail that leads from medieval allegory to modern satire, drama and novel of character" (PMM). Erwin Panofsky called the book "a remarkably complete mirror of human life", based upon the "universality of Brant's self-righteous surliness [...] and the picturesqueness of his metaphors" (Panofsky, p. 30). Incidentally, the book also contains the earliest literary reference to the discovery of America: "Hesperiae occiduae rex Ferdinandus, in alto Aequore nunc gentes repperit innumeras" ("Ferdinand, King of the West, recently discovered innumerable peoples across the high seas", p. 132).

Bound with this is an uncommon Cologne edition of Lucanus's epic "Pharsalia", esteemed throughout antiquity and the Middle Ages for its stylistic and historical merits.

Light brownstaining and occasional light waterstains throughout. A few underlinings in red ink to the "Pharsalia". Upper hinge starting, but binding generally in fine condition. Provenance: Handwritten ownership of Virgilius Fetius of Oettingen in Bavaria (gift from Johann Nortman in February 1577), dated 1578, on the flyleaf. Bookplate of the Bohemian industrialist and art collector Karl Adalbert Lanna (1805-66) to front pastedown; a shelfmark, dated 16 March 1888, written on lower flyleaf. Latterly in the library Werner Habel (his ownership stamp to verso of upper flyleaf). 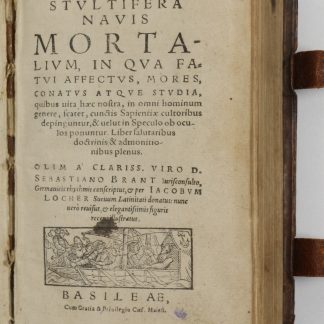