Scott and his colleagues travelled to Aden and the Yemen for the British Museum (Natural History) Expedition. The present work collects the scientific results of the team, with information on mammals, amphibians, reptiles, and insects. Several sections of the reports comment on collecting stations previously established by H. de St. J. Philby. A book version of the narrative appeared as Scott’s "In the High Yemen" (1942).

The copy of the institution that commissioned the expedition: British Museum Natural History Tring library inkstamps to preliminaries and to each wrapper. 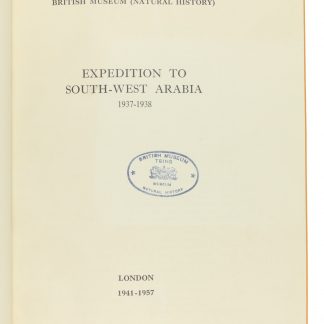