4to. (68) pp. Interleaved throughout. Contemporary boards with decorative title and three strips of green cloth pasted over the spine.

An extensive work of reference for 19th century everyday life including, apart from the calendar section, a genealogy of the Austrian Imperial house starting with Emperor Francis I, as well as information on the latest decrees issued by the government. Important events of 1832, such as an earthquake in Italy or the Emperor's 40th anniversary, are recalled and predictions on weather conditions and eclipses for 1834 are made. The text also provides statistical data on the deaths, births and weddings in Vienna in 1832 and lists European sovereigns and members of the high clergy in the Imperial and Royal territories. Also includes tables for currency conversion, weights and measures, prices and basic timetables of the Austrian coaches, the fairs and markets to be held throughout the Austrian Empire, and distances from Vienna to various European cities.

Occasional pencil notes regarding, inter alia, the purchase of newspapers, specific days for laundry, the paying of rent, and the weather.

Calendar tax stamp for 1834 on title-page. Slightly browned with occasional very insignificant foxing. From the library of the Viennese collector Werner Habel with his ownership stamp to front pastedown. 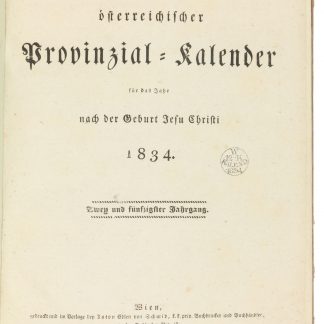