Mostly drawing on Seiler's 1790 "Allgemeines Lesebuch für den Bürger und Landmann", this edition presents a trove of agricultural knowledge from the late 18th century and is an important source for the history of farming and the methods used at that time. It gives detailed information on cultivation, fertilization, stock farming, viniculture and horse keeping, including some veterinary advice. A large section is dedicated to medical and household issues, discussing, inter alia, insect bites, poisoning and frostbite, also explaining how to eradicate vermin and how to bake bread. The last three chapters deal with common superstition, astronomy and the calendar, as well as letter writing. Not merely a condensement, the present work occasionally even expands on the "Lesebuch", while the sections on viniculture and letter-writing are not found there at all. Johann Friedrich Mayer (1719-98), a German priest and agricultural scientist, revolutionized agriculture in Hohenlohe. He improved the three-field system by teaching farmers to fertilize their fields with crushed gypsum, manure and even street dust in order to resolve the ground's nutrient deficiency. This method proved highly efficient, and Mayer became very well known throughout the country as "Gipsapostel von Kupferzell" ("Kupferzell apostle of gypsum"). The Protestant theologian G. F. Seiler (1733-1807) taught at Erlangen University.

Binding severely stained, paper foxed throughout. From the library of the Viennese collector Werner Habel, with his ownership stamp to front pastedown. 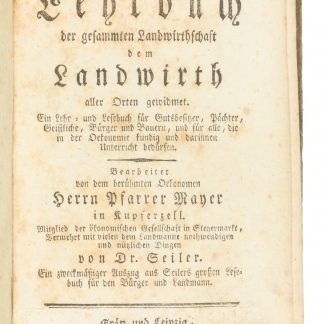