8vo. (15), 194 (instead of 195), (2) ff. Title printed in red and black. With 3 engraved maps, 13 (instead of 33) views (but 1 torn through, lacking half the view), and 27 costume and portrait woodcuts in the text. Modern vellum with giltstamped spine title, re-using the remains of the original blindstamped 17th century pigskin covers, stamped "IHD" and dated 1602. Marbled endpapers.

Very rare first edition of this famous chronicle by the versatile German historian, draughtsman and civil engineer Wilhelm Dilich (or Scheffer, 1571-1650), with descriptions of the principal towns and rulers. The "views and plans appear mostly to have been made from the author's original drawings; the are very cleanly engraved and far superior to the mass-produced town views familiar from the late 16th century" (cf. Apponyi). The present volume lacks a substantial number of the views as compared to the list of plates bound at the end, but includes Kosice, Liptószentmiklós ("St. Nikolaus", wanting the right half), Gyula, Tokaj, Szikszó, Pannonhalma ("Martinsberg"), Zsámbék, Hatvan, Timisoara and others. Several ink annotations by a contemporary hand. The woodcut illustrations show the Hungarian estates and soldiers in their costumes, such as hussars, townsmen and farmers.

Wants fol. 17 (part of the description of Székesfehérvár as well as the plate), with the index annotated by the 17th century owner: "car[iren] 2 blat, außgerissen von eim schelmen" ("wants two leaves, torn away by a scoundrel"). 19th century Hungarian note of costs for book and binding on the flyleaf (4 guilders in all, dated 1854); below this an extensive bibliographical acquisition note by a later owner who bought the volume from a Budapest rare book dealer in 1913. Small contemporary engraved view of the city of Danzig mounted on lower pastedown. Old ownership clipped from title page (some loss to text and border, rebacked and retouched in pencil). Rather severely browned throughout due to paper. From the library of the Viennese collector Werner Habel (1939-2015) with his handwritten and stamped ownership, dated 1975, to flyleaf. 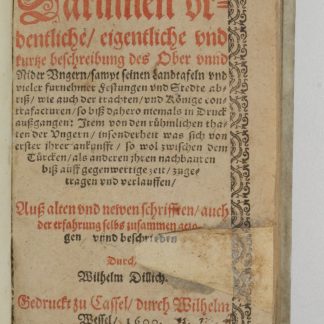