Including the Siege of Vienna

4to. XXXVI, 455, (1) pp. With 5 engraved folding plates and one folding table which extends to pp. 135-138. Contemporary boards with handwritten spine title.

A prominent work on Ottoman military history divided into two parts, the first treating weapons, marches, camps, battles and sieges in general, including the Siege of Vienna in 1683, the second one discussing armed conflicts between the Ottoman and the Holy Roman Empire in Hungary between 1682 and 1739. The engraved plates illustrate the text by exhibiting the line-up of the Ottoman forces as well as their fortifications in various situations, while the table shows the organisation of the army divided into land and naval forces. 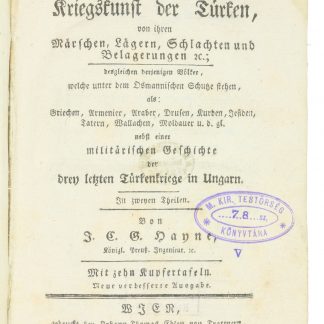