An interesting medical work on the so-called "Hungarian disease", a variety of typhoid fever especially common among armies stationed in Hungary, but which also affected the civilian population. The German physician Sartorius (d. 1696), who took a doctoral degree in Altdorf in 1680 and mostly practiced in Bamberg, discusses the causes of disease ("the air, [...] affected by large variations in temperature [...] thunderstorms [...] humid heat [...] and vapours emanating from unburied corpses and open graves [...] as well as a poor diet [...], consuming unripe fruits, rotten meat [...], fish from unclean water"; cf. Sartorius), describes its symptoms and recommends corresponding treatments. Mostly in Latin with some German and Greek interspersions. He reports that the malady first occurred during the 1566 campaign of Emperor Maximilian II against the Ottoman Empire and then quickly spread throughout Europe. Includes some remarks on the history and qualities of the Philosophers' Stone as an appendix. With dedications to Philipp Gaston Wolf, Count of Wolfsthal (d. 1717), the Bamberg councillor Johann Heinrich Mertloch and the physician Johann Georg Volkamer (1616-93).

Small holes and tears to the wrappers. Paper rather browned throughout. From the library of the Viennese collector Werner Habel, with his signed and stamped ownership, dated 1977, to inner wrappers. 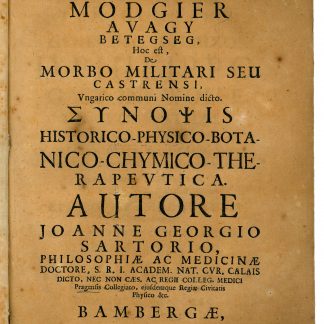