First and only edition of Hinckelmann’s Arabic text of the Qur’an, the second edition of the Arabic Qur’an, the first actually available to readers and the only convenient edition before 1834, with a 36-page Latin introduction by the editor making extensive reference to the earlier literature. The first complete Arabic edition of the Qur’an was printed at Venice ca. 1537/38, intended for distribution in the Middle East, but the entire edition was thought to have been destroyed until one copy turned up in the 1980s. Hinckelmann’s edition was therefore the first edition available to European scholars, missionaries or Islamic readers. It was followed by Ludovico Marracci’s Arabic and Latin edition published at Padua in 1698, whose two folio volumes and extensive (anti-Islamic) commentary made it both expensive and inconvenient to use. The editions published at St Petersburg (from 1789) and Kazan (from 1803) for the use of Islamic groups in the Russian Empire were almost unknown in Europe, so the present edition remained the primary source for European knowledge of the Qur’an for 140 years, until Flügel’s 1834 Leipzig edition. VD17 has four different entries for this work, with different fingerprints, but they are all the same edition.

With bookplate on pastedown, covered behind the first endleaf, which is partially mounted to the pastedown, and an inscription on flyleaf. First quire partly detached, two small tears in the foot margins of pp. 185f. and 375f., first leaf slightly soiled and some minor thumbing to the first and last few leaves, otherwise in very good condition. 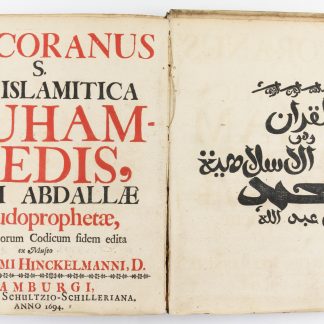