Around the world in sixteen months

[Circumnavigation Expedition of the Corvette Saida]. 156 photographs documenting the 1884-1886 mission of the Imperial corvette Saida.

Fine photo documentation of the 16-month circumnavigation expedition of His Majesty's Ship Saida, the last sailing vessel launched by the Austro-Hungarian Imperial and Royal Navy, in well-preserved original vintage prints from the glass negatives. The "instructional voyage" commanded by captain Heinrich Fayenz served the practical training of the naval cadets, but was also intended to facilitate political and trade interests as well as the collection of ethnographic and scientific specimens, to improve cartography, and to record hydrographic and meteorological conditions (cf. Palla, p. 17). "The Hydrographic Office supplied a camera and tripod, tasking the mission with photographing 'landscapes, buildings, and types of races'" (cf. ibid., p. 18). To this end, the ensign Felix Falzari (later a librettist for Franz Lehár) was instructed in the art of photography by Wilhelm Burger, who had previously recorded the Austro-Hungarian North Pole Expedition. The photographs show landscapes and views of cities, buildings and routes of transportation, the local population, as well as life aboard the ship. Areas visited include Australia, New Zealand, South Africa, Brazil, Sri Lanka, Singapore, and Java. Unsigned, though some prints show a caption in the negative. A splendid ensemble, formerly in the collection of the Viennese publisher Christian Brandstätter.

Original 1880s backing cardboard insignificantly bumped or chipped along edges; prints appealingly sepia-toned, the vast majority showing crisp contrast. Mostly unpublished, though a number of the photographs have been illustrated in the account of the voyage written by Rudi Palla (cf. below), to whom Brandstätter had granted access to his archives. 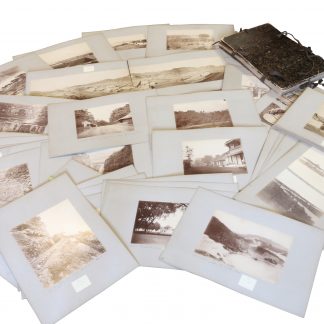