First edition of this geography of northern Africa, extracted from the author's "Kitab al-mamalik wa-al-masalik" ("Book of Highways and of Kingdoms", a manual of universal geography). In Arabic throughout save for the French introduction. A second edition would not appear until 1910. The 11th century Andalusian Arab historian al-Bakri is regarded as the greatest geographer of the Muslim West. His works are noted for the relative objectiveness with which they present information. For each area, he describes the people, their customs, as well as the geography, climate and main cities. "The work, which contains no maps, appears to be independent from al-Balhi and based on original research. According to Simonet, his description of the Isles of the Blessed (Fortunatas, Canary Islands), quoted by al-Nuwairi, is taken from the Etymologiae of Isidor of Seville" (cf. Brockelmann). 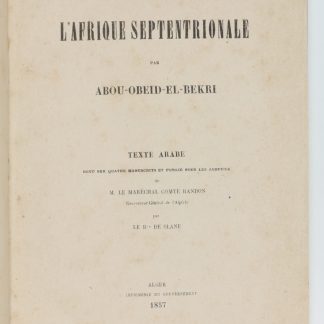