The Levantine Expedition of Algernon Heber-Percy in Vintage Photographs

Heber-Percy, Algernon. Argob and Bashan. Moab and Gilead. Photographs from Syria and Jordan.

Two monumental albums with photographs from travels undertaken to Bashan, Argob, Moab and Gilead, presently Jordanian and Syrian territories, in the years 1894-95. Mounted on the album leaves are 174 photographs taken by the British officer Algernon Heber-Percy (1845-1911), recording two of his expeditions to the Levant. Most of the photographs show archaeological sites, ancient ruins, structures, Druze and Bedouin villages and the residents of the villages that Heber-Percy visited in the course of his travels.

The first album, entitled "Argob and Bashan", contains 86 photographs of sites that are today in Syrian territory, specifically Trachonitis, Bashan and Jabal al-Druze, which the photographer visited together with his spouse and two sons in 1894. The sites include villages in the Trachonitis region (the Lajat) as well as in the cities of Qanawat, As-Suwayda, Bosra and other cities, and the road from Damascus to Beirut. The album also includes photographs of the region's Druze inhabitants.

The second album, entitled "Moab and Gilead", contains 88 photographs from sites that are today in Jordanian territory, visited by the photographer in 1895, including Beth Ba'al Ma'on, Dhiban, Umm ar-Rasas, Amman, Salt (Al-Salt) and Jerash. The album also includes photographs of the region's Bedouin inhabitants and three photographs showing a travelling circus of trained animals (a monkey, a goat and a bear) encountered by the photographer in the Madaba area. Heber-Percy also published on the expeditions recorded in these photographs: his account of his travels appeared in two books, "A Visit to Bashan and Argob" (London, 1895) and "Moab Ammon and Gilead" (1896), and some of the photographs in the albums were reproduced in these books.

Bound for the owner by Bennion & Horne, Market Drayton (their label to pastedown). Some foxing, mainly confined to flyleaves; occasional slight edge flaws. Bindings slightly scuffed at the extremeties, but in all a finely preserved, impressive set. 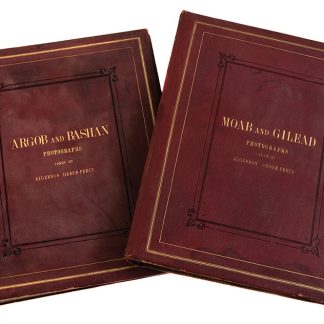