Previously unknown textual witness of Bernhard von Breydenbach's famous travel report, which had appeared in print in February 1486 (in Latin) and then again, in June of the same year, in German. This meticulously written redaction of the German text is the work of the Dominican friar Mathias Sartor (Schneider), "ordinis predicatorum conventus Hallensis predicator in Mulhaußen" (fol. LXXIr). The Dominicans had had to leave their Halle convent in 1520, which may explain why Sartor by 1527 was installed in Mühlhausen, a few days' travel distant.

Breydenbach's book is hailed as the first authentic western source for the Near and Middle East, as it was prepared from actual observation of the lands and people described. Breydenbach travelled to the Holy Land in 1483/84 with a large company including the Utrecht artist Erhard Reuwich, who would be the book's first printer. Following the traditional route, the entourage travelled from Venice to Corfu, Modon, Crete, Rhodes and Jaffa before arriving in Jerusalem, and then through the Sinai desert to Mt. Sinai, Cairo, and Alexandria on the return journey. The present manuscript copy omits the illustrations, as did most of the later editions and translations, though it is not clear upon which printed version, if any, the ms. is based, and although it contains the same appendices as the first edition (a discussion of oriental religion, in particular of the Muslim religion, a lament over the Holy Land, and an invocation to reconquer it), the present text appears quite original in its paraphrases and redactions of Breydenbach's famous travelogue.

Written in Sartor's close, neat and well-legible hand throughout. Some insignificant browning, occasional light ink- and waterstaining. Lower cover has a large brownstain, with a few binding cracks and flaws (especially to hinges) repaired, but extremely well preserved in general. Provenance: formerly in the collection of Baron Hans Carl Ow von Wartendorf (1814-82) with his handwritten table of contents on an inserted bifolium, confirmed after his death on a separate sheet by the Swabian librarian and historian Wilhelm von Heyd (1823-1906). Acquired from a private German collection. 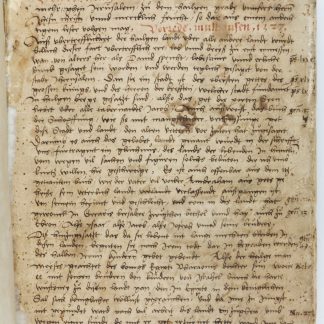