Exceptionally rare first edition in Spanish, an abridged translation of volume one "Das Kapital". Its scarcity is explained by the brittle, poor quality of the paper stock - the same used for printing Zafrilla’s newspaper - and its very small print run, thought to number no more than a thousand copies in total.

Pablo Correa y Zafrilla (1844-88) was a federalist, translator, and lawyer. He was professionally attached to the prestigious Colegio de Madrid, enjoyed a close friendship with Catalan federalist Francesc Pi i Margall, and was appointed a deputy of the Cortes Generales in 1873 during the First Spanish Republic. He was also the editor of La República, a newspaper which had announced its intention in early 1886 to publish a serialised translation of Capital, which would be delivered bimonthly to its subscribers. It was decided that the pages would be twice the size of the newspaper’s usual publications, to account for the length of Marx’s work and to prevent the individual parts from becoming too thick. Though he promised to work directly from the original German (1867), and said as much in his preface, Zafrilla actually based his translation on the first edition in French, translated by Joseph Roy and published in 44 livraisons by Lachâtre from 1872 to 1875 (cf. Ribas 1985 for a detailed analysis of the textual similarities between the French and Spanish text).

The first part of Zafrilla’s "El Capital" was sent to subscribers with a copy of the newspaper in February 1886 - the title-page reflects the year of first delivery, not final printing - and publication must have been completed by mid-1887, when La República was offering subscribers the option, for one peseta, of binding all the parts into one quarto volume in "elegantes tapas de tela" (elegant cloth covers). Non-subscribers could purchase all the parts, without cloth, for 60 cents; it is possible that the printed wrapper, dated 1887, which is sometimes mentioned in relation to Zafrilla's translation, was produced for this purpose. It is estimated, therefore, that the print run can have been no more than a thousand copies in total, with a few hundred of this amount reserved for subscribers, the rest being made available for separate purchase (Castillo, p. 93). An unknown remainder of these was apparently later bound up for La República to offer as gifts to new subscribers or those who renewed their subscription for a further six months, yet we have found no record of any other copy surviving (with the exception of that cited by Ribas, below). According to OCLC no library is known to possess "El Capital", and no other copies are recorded as having appeared at auction. Pedro Ribas, a renowned collector of Marxist literature, states that he has handled just one in his lifetime, that held at the Faculty of Law, University of Salamanca (p. 205).

Zafrilla’s translation received little to no comment in the contemporary press. When alluded to, it was dismissed as being imperfect and incomplete, particularly by El Socialista, the periodical founded by the Spanish Socialist Workers Party (PSOE) in 1886. Brief excerpts from Marx’s writings had been translated into Spanish before - beginning in 1872 when La Emancipación, the Spanish IWMA organ, published translations of Marx’s preface to the first German edition and his letter to Lachâtre in the French edition (Draper, Chronicle, 72:58) - but Zafrilla’s translation was the first concerted effort to present in full the message of "Das Kapital" to a Spanish audience. The present copy is a remarkable survival considering the complexity of its serialised publication.

Binder’s stamp of Emilio Brugalla (1902-85), the leading Spanish binder of the 20th century, to front free endpaper verso, dated 1937; bookseller’s ticket to rear free endpaper recto (Libreria Catalónia); tax stamps of the Spanish crown ("timbre 3 pe[se]tas 10 kil[o]s Madrid"), with their arms, to margins of 11 pages. Corners gently rubbed, contents browned and occasionally foxed, edges friable with some short tears, small area of dampstain to head of gutter of book block and dampstain to edges of half-title and title leaf, closed tear (3 cm) to fore-edge of leaf 8.1, a few closed tears and punctures to fore edge of 18.4. Overall a well-preserved copy of a fragile publication, finely bound. 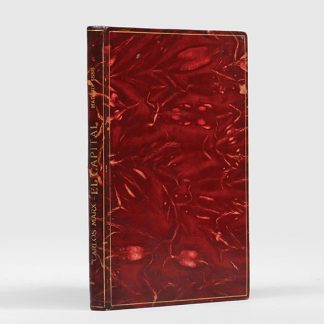