Half-length portrait of baron de La Châtre, the father of the publisher Maurice Lachâtre, with the decoration of the "Légion d'honneur" clearly visible on his robe. He was born and died in Issoudun, was appointed a knight on 12 December 1803 and promoted to the rank of an officer on 14 June 1804. He participated in the Revolutionary Wars as well as in the Napoleonic Wars, reaching the rank of colonel, and was granted the title of a "Baron de l'Empire" on 19 March 1808. Narrow cracks in the portrait; small flaw at lower margin.

Half-length portrait of his wife and the mother of Maurice Lachâtre, Élisabeth-Constance Séonnet (born on 23 June 1784 in Issoudun, died on 13 November 1860 in Maisons-Laffitte), in a sitting position, her left arm resting on the back of the chair, wearing a white dress and a furry scarf round her shoulders. The miniature was probably created soon after her wedding on 13 April 1803. Marginal flaw to wooden frame. 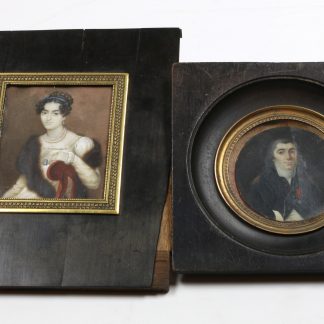