Remarkable political correspondence from the exile to Maurice Lachâtre. Pyat, sentenced to death by the 3rd War Council on 28 March 1873, took refuge in London. Lachâtre, to be deported to a fortified compound, fled to Spain in December 1873. Following the amnesty (11 July 1880), the two outlaws, returned in France, co-directed "La Commune", a socialist newspaper (45 issues, 21 Sept.-4 Nov. 1880).

1872: Pyat recounts his flight from Paris to London and deplores France's state of despondency.

He advises against a return from Spain and attests to horrors committed during the fall of the Commune. Pyat notes the desired conditions for publishing a history of the Commune, combining a newspaper, collaborating with the printer Juste Vernouillet, pros and cons of publishing in Paris or Brussels. Under the pseudonym "Solange" he considers the lifting of the state of siege, weighs the interest of a rapid or deferred publication of the history and the newspaper, and underlines risks to the country. He speaks of help for the outlaws, urges Lachâtre to keep away from the rigors of Thiers, shows interest in other Lachâtre authors (including Karl Marx and Eugène Sue), and makes political predictions: the monarchists, he says, would rally around Thiers, and political opinion would become more radical.

1874: Pyat sets out his observations on Castelar's fall and the Spanish Bourbon restoration, as well as on Lachâtre's setbacks in Belgium.

1875: Pyat communicates a letter by Garibaldi (two ms. copies attached) for the press "for French propaganda". He considers a newspaper proposal. The justice of Paris turns out to be the triumph of the murderers. He debates the project of an exile newspaper, mentioning "La Voix du procrit" of Ledru and "Le Nouveau Monde" of Louis Blanc.

1876: the amnesty was spoiled. He fights Lachâtre's hesitations to invest in a French newspaper, recalls the success of "Le Combat", and comments on the clumsiness of human rights.

1877: his friend Gambon has told him about Lachâtre's plan of moving to Naples. Pyat would only agree to direct Duportal's "La Marseillaise" under a different title and with an adopted focus, criticizing the paper's unclear policies.

1878: Pyat discusses their newspaper "La Commune", finances, seizure of the first issues, a guarantee for the citizen Castelnau, a friend and collaborator of Delescluze, summonses by the correctional police for non-payment of a fine, complaints about Dr Lux and the administrator Avenant. Several times he refers to Lachâtre's safe conduct to Paris.

1879: New reflections on the amnesty. Versailles had no right to punish, no right to pardon; the outlaw's duty is to return only if he can win his cause and make the others return. Pyat urged Lachâtre to return to launch the newspaper; he was not mistaken: no amnesty. Pyat considers "Le Travail", in regard to declaration, title, administration, drafting (Rogeard, Gambon, Cluseret, Reclus, Protot, etc.). He hopes that General de Wimpffen will pardon Lachâtre. He gives advice in case of Lachâtre's reprieve and return, and receives emotionally the portrait of a martyr who redeems mankind. He warns of an agreement with Blanqui, whose "La Patrie" in danger proves that he is not the best journalist, and advises for caution until after the vote of the Senate. 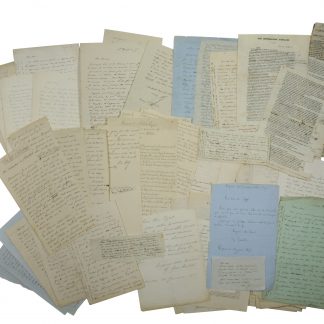