Illustrious and powerful Florentine men: first edition to include all five biographies

Florence, Bernardo Giunta the younger and heirs of his brothers, 1602.

4to. (12), 198, (6) pp. With the Giunti's woodcut decorated fleur-de-lis device (in a decorated cartouche) on the title-page, a woodcut tailpiece, woodcut decorated initials (3 series) and decorations built up from arabesque typographic ornaments. 17th century (?) sheepskin parchment, sewn on 3 supports, with manuscrpt titles on the foot edge and spine, the former in gothic lettering. Later endpapers.

Biographies of five "illustrious men", all known primarily for their positions of power in Florentine politics, in the original Italian, by Silvano Razzi (1527-1611). The Giunti had published the first edition of the first four of these biographies in 1580 as "Vite di quattro huomini illustri", but added Valori for the first time in the present second edition. Razzi's selection is interesting for including people whose power proved short-lived or who worked largely behind the scenes: all five changed the course of Florence's history with important long-term consequences, but only Cosimo de' Medici is a household name.

Farinata (or Manente) degli Uberti (1212-64) was a leader of the Ghibeline faction of Florence from 1239 to his death, at the height of the fierce power struggle between the Imperial Ghibelines and the Papal Guelphs. He ruled Florence from 1239 to 1250, when the Guelphs exiled him, but he recaptured Florence in 1560 and to some degree tempered the vengence of his allies, who would have left the city in ruins. The Guelphs were to take the city again two years after Farinata's death. He was posthumously convicted of heresy and appears in Dante's Inferno, burning in hell. Gualtieri VI (1304/05-56), Count of Brienne and titular Duke of Athens, was born and died in what is now France, and most of his family was of French descent, but they lived for generations in Greece and the Middle East and owned much land in France, the Kingdom of Naples and the Peloponnesus. He is best known as the ruler of Florence in 1342. He rescued Florence from a severe financial crisis, but did so in so heavy-handed a manner that he quickly made enemies and was forced out of office after less than a year, though he had been appointed for life.

Salvestro de' Medici (ca. 1331-88), who ruled Florence on and off from 1378 to 1382, also opposed the Guelphs, rallying the support of the guilds (which included the bankers) against them.

Cosimo de' Medici the elder (1389-1464), head of the great banking family and de facto ruler of Florence for half a century, was also one of the greatest patrons of the arts, architecture and scholarship of all time.

Francesco Valori (1439-98) had supported Lorenzo de' Medici, ruler of Florence from 1469, but supported the zealous and violently moralistic reformer Girolamo Savonarola against the Medici when Lorenzo died in 1492. Both Valori and Savonarola were killed in 1498.

With a tear along the fold at the foot of bifolium 2A1/4, some small and mostly marginal stains in the foot of the gutter margin of 2 leaves, minor foxing, and some waterstains in the fore-edge margin, but still in good condition and with generous margins. Biographies of five Florentine politicians who changed the course of the city's history: the fifth published here for the first time. 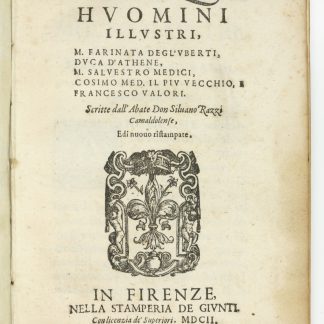