Large-scale map by the German geographer Julius Iwan Kettler (1852-1921) showing Russia at the end of the First World War. A well-preserved specimen with interesting provenance: originally in the library of the German diplomat Friedrich Werner von der Schulenburg (1875-1944), one of the conspirators against Hitler, it was later part of the library of the Soviet Foreign Office under Stalin (Schulenburg's handwritten ownership, dated 1918, and the stamp of the Soviet Foreign Office are on the title). From 1934 to 1941 Schulenburg served as German ambassador to the Soviet Union and was one of the principal architects of the German-Soviet Nonaggression Pact. When the Wehrmacht invaded Russia in 1941, Schulenburg was recalled swiftly, having to leave his library behind. For his involvement in the tragically failed plot of 20 July 1944, Schulenburg was executed on November 10. 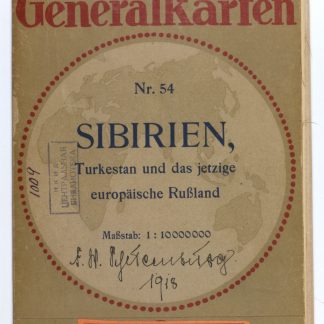