The Jesuit Jacques Villote (1656-1743) was sent to China. Leaving Marseilles in 1688, he arrived in Isfahan in October 1689. His various attempts to penetrate China were unsuccessful, and he settled in Isfahan, where he remained for twelve years. He was not recalled to France until 1712. At Isfahan, he taught plainchant to the Persians and translated several works in Armenian.

Some staining. OCLC locates no copy in the U.S.; however, one copy in Princeton (the Atabey copy). 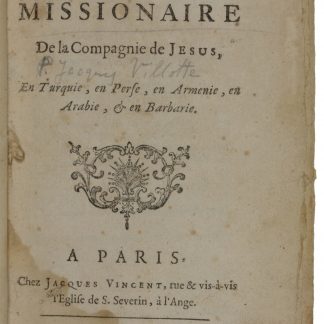