Modor’s Day of the Locust: The Second Recorded Copy, With Manuscript Annotations by Johannes Gödtkens (1658-1744)

Extremely rare third edition of Stephan Pilarik's Catechism: the second known copy, the only other one being kept at the Szécheny National Library in Budapest (shelfmark RMK III. 3787). Stephan Pilarik junior (1644-1720), son of the like-named Hungarian theologian István Pilarik (1615-93) and, like him, a Protestant exile in Lusatia (driven abroad by the Counter-Reformation, like so many non-Catholic subjects of Habsburg rule), had served as pastor in Hungary, Silesia and Saxony and was his father's substitute before becoming vicar of Klein-Röhrsdorf in 1695. His Catechism, originally entitled "Höchst-nöthiger, nützlicher und in mancherley Anfechtungen bestehender catechetischer Lehr-Grund", was first published in 1681 and then again in 1687, both times by Johann Christoph Jacob in Brieg (Brzeg). A fourth and fifth edition were to appear as late as 1714 and 1717, published by Schwencke in Dresden. The long autobiographical preface ("Historische Zuschrifft") to the present third edition is dated 10 November 1693, a mere nine months after the passing of Pilarik senior. The foreword mentions a locust plague that the author witnessed in Modor (now Modra in Slovakia) in 1685 and includes a large folding plate showing the locusts descending on the village. Remarkably, this plate has been extensively annotated by the book's contemporary owner: both the margins of the engraving as well as the blank reverse contain a closely written account of similar plagues that devastated the crops of Bramel (near Bremerhaven) during the Thirty Years' War as well as in 1710. This report is signed by Johannes Gödtkens (1658-1744), a native of Hamburg who served as pastor in Bramel from 1698 to 1711 before transferring to Grünendeich near Stade, where he remained until his death (cf. Bruhn). Throughout the volume are numerous additional underlinings and annotations in Gödtken's hand, giving evidence of the pastor's close study of Pilarik's catechism. Loosely inserted at the end is an appendix of 24 pages, providing a more extensive treatment of a particularly thorny aspect of Protestant doctrine, namely predestination and how to determine who is among the elect ("Woran kan man abnehmen, welche die Auserwehlten seyn, und welche sind ihre Merk-Zeichen?"). This appendix appears to be missing from the Budapest copy, which also seems to contain a mere 11 plates (likely the frontispiece and the ten plates illustrating the Ten Commandments). An additional engraved portrait of Pilarik jr. (by Johann Tscherning, after a drawing by Moritz Lang) is inserted with the appendix. 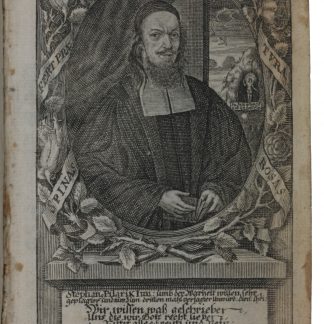