Roberts, Fred[erick]. Is an Invasion of India by Russia Possible?

Rare confidential report on the Russian threat to the Raj, written at the close of 1883 by Sir Frederick Roberts (1832-1914), then Commander-in-Chief of the Madras Army. Having won the Victoria Cross in India in 1858, much of Roberts's career was occupied by the Great Game, in the Second Afghan War, and later as long-serving Commander-in-Chief of India. Adopting a broad strategic perspective, the hawkish general here writes: "It seems scarcely possible that any one, who has studied the question, can view unconcernedly the position which Russia is so rapidly gaining; or that anyone interested in India should now object to a reconsideration of our Indian frontier policy [...] Russian officers are free to traverse India, and doubtless furnish full information to their Government as to all our weak points. Of the strength and resources of the Russian armies in Central Asia we know literally nothing [...] It is time for us to throw off the feeling of confident security in which we seem to be living, and to realise that an ambitious Power, confident in the might of her two millions of armed men, is approaching nearer and nearer to our borders".

Horizontal creases where once folded, a few light spots. Some marginal pencil markings, pencil note to p. 9. Of extreme rarity: we have been unable to trace a copy on OCLC, though a few copies are known in special manuscript collections such as the Royal Pavilion Libraries (Hove Library, Wolseley Mss, W/MEM/2.17) and the Balliol College Archives (Papers of RBD Morier, Box 41, no. 20). 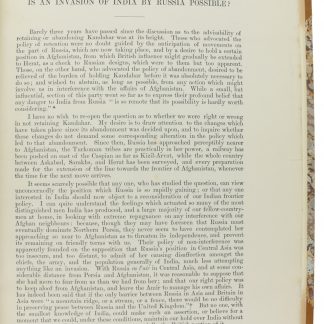