[Tipping, William Fearon] - Knight, Frank & Rutley, auctioneers. (Brasted Place Estate, Kent). By direction of the Executor of the late Colonel W. Fearon Tipping. Kent Between Sevenoaks and Westerham. The Beautiful Freehold and Residential Estate known as Brasted Place, Situate in the pretty Kentish Village of Brasted, about one mile from the Station, four miles from Sevenoaks, two miles from Westerham, and extending to about 650 Acres Mostly in Brasted Parish, but partly in that of Sundridge, including The Mansion, standing in a finely timbered Park of 120 Acres and containing six Reception Rooms, 22 Bed and Dressing Rooms, two Bathrooms, Stabling for seven horses, Motor House, etc., Model Home Farm, and Beautiful Old Gardens. Also 18-Hole Golf Course has been planned under the advice of James Brais. Home Farm and densely timbered Woodlands. Several excellent Private Residences, Village Shops, Water Mill, and numerous Cottages, which Messrs. Knight, Frank & Rutley have been instructed to offer by Auction as a whole, or in Lots, on Tuesday, 11th June, 1912, at The Village Hall, Brasted, commencing at two o'clock precisely (unless previously sold by Private Treaty).

"Final edition" of the auction catalogue describing the Brasted Place estate of the late W. F. Tipping (1847-1911), Colonel in the Royal Welch Fusiliers, Justice of the Peace and High Sheriff of Kent. He had inherited the estate from his father, the railway magnate William Tipping (1816-97). The English traveller, politician, amateur archaeologist and artist, who served as director of the London and North Western Railway, had purchased Brasted Park in 1857 and had helped restore dilapidated cottages, paid for the widening of local roads, and supported local community institutions at Brasted. By 1876 Tipping was director of 13 railway companies; one of his responsibilities was to arrange the travel of the royal family. W. F. Tipping's surviving brother Henry Avray Tipping (1855-1933) inherited the estate, along with the large family fortune, upon the deaths of both his brother and mother in 1911, selling much of the property.

Binding rubbed; extremeties bumped. Interior shows occasional light foxing; occasional slight tears to edges of plates. Extremely rare; not in libraries internationally, though a copy apparently survives at the Historic England Archive at Swindon (the British Library only holds a copy of the 11-page catalogue of the Brasted Place sale that took place six years later, in 1918). 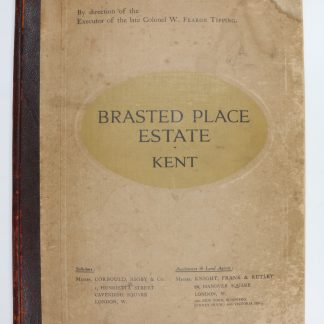