Large folding map (60 × 90.5 cm), printed in light orange with darker purple, depicting the Kingdom of Saudi Arabia and its main roads. With on the right the title in both Arabic and English and a table with the distances from one city to another.

Large folding map, published by the Arabian American Oil Company, depicting the Kingdom of Saudi Arabia. It depicts the country’s roads, trails, railroads, roads that are still under construction and proposed roads, as well as cities, villages, airports and deserts. The table on the right shows the distance in kilometres from several towns and cities to some of the major cities: Buraidah, Dhahran, Dammam, Hofuf, Jeddah, Mecca, Medina, Riyadh and Ta’if. 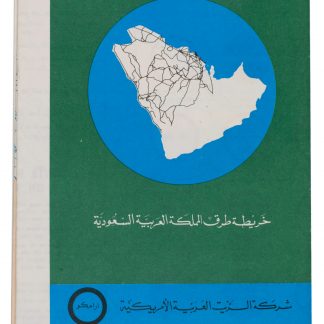