To the eminent American botanist Asa Gray (1810-88), a friend of Darwin's: "I am very much disappointed in not being able to come to the Club today. The day after getting back to Boston I was taken with a very severe cold which entirely unfits me for company. I had hoped to meet you and tell you how greatly I regretted that I could not be with you and your distinguished companions [...] and to have a good talk with you and some others of my friends who I hope will be at the Club [...]". A member of New England's "Fireside Poets", Holmes was acclaimed by his peers as one of the best writers of his day. He was also an important medical reformer. His like-named son remains one of the most widely cited Justices of the Supreme Court of the United States. 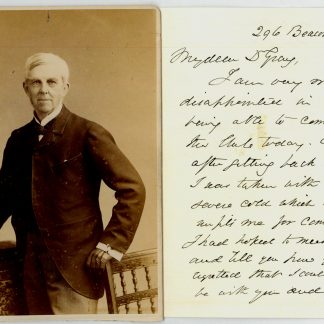