The precise nature of the information on a school that Settembrini obtained for his friend remains unclear. Pasquale Villari was a member of the Italian council of education and studied the English and Scottish school systems during his stay in Britain as a juror at the World Exhibition in 1862. Settembrini's letter shows, however, that Villari was already acquainted with his later wife and translator Linda White (1836-1915) at the time. The daughter of the merchant and politician James White was married to the Italian merchant Vincenzo Mazini from 1861 until his untimely death in 1869. Later she established herself as an author of fiction in Florence and held a well attended salon. White and Villari married in 1876 and had one son. Between 1878 and 1907 White translated several of her husband's historical works.

Creased and with defects from former mounting. 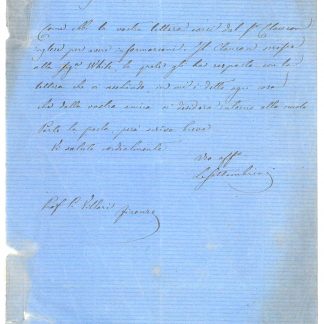