To the American politician and diplomat Charles Francis Adams, Sr.: "You were so kind as to fix Tuesday the 30th as a convenient day to dine with me and it has proved & greatly so to Lord Stanley [i. e. the British statesman Edward Stanley, 1826-93] and the other members of the trust [i. e. the Peabody Trust, founded in 1862 as the Peabody Donation Fund] I have therefore merely to say that, the dinner will take place at this Hotel at 7 o'clock [...]".

Adams worked as an ambassador in London since 1861.

Two mounted newspaper clippings from April 1866 are loosely enclosed: one a transcript of a letter from the Queen to Peabody upon his leaving England, expressing her appreciation towards him and offering to have a miniature portrait of herself made for him, with his answer below; the other paraphrasing a speech given by Adams complimenting Peabody. 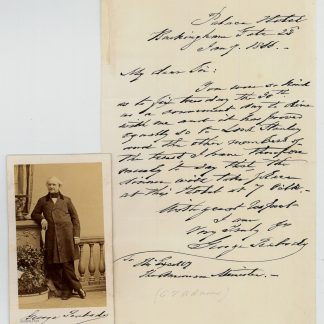