HRH King Saud of Saudi Arabia visits Germany: a full photographic account by his German personal protection detail, with a signed portrait of the King

Unique photograph album comprised exclusively of previously unknown, unpublished material, documenting HRH King Saud's five-week visit to Germany in the summer of 1959. Providing the perspective not of a press photographer but of a participant with privileged access throughout, it was apparently assembled by a member of the German security detail, a special unit of the Federal Government's detective squad which provided necessary local backup to the King's own bodyguards.

King Saud arrived in Freiburg im Breisgau by train from Venice, on the evening of 22 July, accompanied by his brother HRH Muhammad bin Abdulaziz Al Saud; his uncle Ahmad bin Abdul Rahman Al Saud; the mayor of Riyadh, Prince Fahd bin Faisal bin Farhan; and four of his sons, as well as an entourage of some 80 persons. In Freiburg he visited his daughter Nour bint Saud, who was being treated at the University Hospital for severe burns sustained the previous year. The album shows King Saud's triumphal entrance at the train station, him granting an audience to Freiburg's mayor Josef Brandel, taking a walk through the city with his five-year-old son HRH Prince Mashhoor at his side, meeting the Saudi envoy to Germany, Jawad Mustafa Zikri, and visiting Lake Titisee, the Feldberg (which the Arabian guests ascend by chairlift) and other places in the Black Forest. The King's hulkingly elegant blue and black Cadillacs with their Swiss plates present a striking contrast to the the miniscule German police cars of the 1950s that protect it. Again and again the King is asked to sign autographs for the cheering Germans; several traditional local bands and choirs honour him with parades and music.

The end of July saw King Saud's departure from Freiburg, travelling onwards through Ettlingen in Baden to Bad Nauheim in Hesse, famous for its salt springs, where he was to take the waters. Here, he we see him greeted by the aged Saudi foreign policy advisor Shaikh Yousuf Yassin, having tea on the spa terrace, and in conversation with his Bonn-based ambassador as well as with local German children. The album commemorates the sojourn not only with numerous clippings from contemporary newspapers feting the famous guest, but also by original menus in German and Arabic that reflect the sumptuous dishes set before the King at "Hilbert's Parkhotel". Another series of photos shows King Saud examining a falcon brought to him by a Munich falconer. We see the royal coffee-makers with their Arabian coffee cans and the omnipresent Arabian guards (with German and Saudi security staff often seated together), but the photos also document King Saud's visit to Theodor Heuss, the first President of the Federal Republic of Germany, in the final months of his decade-long presidentship. Saud spent a night at the Federal Government's guest house on Petersberg near Königswinter; further stations of his tour through Hesse included Königstein and Kronberg im Taunus, Bad Homburg, and Wiesbaden, where the King met with the Minister-President of Hesse, Georg-August Zinn (who had the police band play the Saudi national anthem). The photographs capture not only the King's visits to Bad Nauheim's dentist Dr. Atta (who, the captions reveal, extracted several teeth and prepared jacket crowns), the King's personal physician Dr. Adib, his personal security officer and his private secretary, but also the throngs of German onlookers waiting to catch a glimpse of the ever-patient smiling and waving Saudi royal.

The album concludes with King Saud's departure and his final farewell to the German security staff at the Swiss-German border. While the King would continue his journey to Geneva and later to Cairo, the final photograph shows two German security officers back at the hotel in Freiburg, enjoying their first moment of relaxation in five weeks. The photographer's unique access to the King and his closest personnel throughout his entire tour makes this an outstanding document of King Saud's long visit to Germany at a crucial moment of his reign. 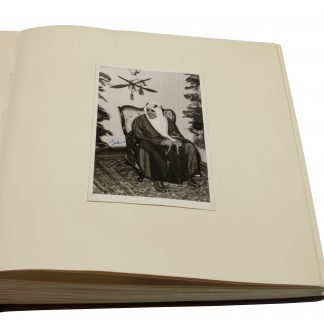