A massive map of the Arabian Gulf in its entirety

Extremely rare: the two massively-sized synoptic 1:1,000,000 maps covering the Arabian Gulf in its entirety, as published by the Soviet Union's General Staff of the army. Not to be confused with the Soviet Union's vastly smaller General Staff map quadrangles of the same scale which are aligned along the graticules, spanning 4° latitude by 6° longitude and covering only roughly half the area shown by each of the present sheets.

Edited from information sourced during the years 1972-1983 by D. D. Trushin and I. A. Medvedev. Although not specifically marked as classified, all General Staff maps de facto constituted closely guarded military material, none of which became available in the West before the end of the Cold War in the early 1990s.

A few insignificant edge flaws, but generally in perfect condition. 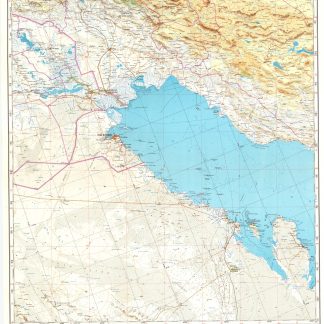