Particell from the opera "The Love of Danae"

Particella from the opera "Die Liebe der Danae" (Op. 83). The "cheerful mythology in three acts", as the composer called his work, should have been premiered at the Salzburg Festival in 1944, but had been postponed because of the assassination of Hitler on July 20. On August 16, there was only a first and one-time performance in the form of a public rehearsal under the direction of Clemens Krauss.

Later provided by Strauss with title and signature in ink. A nice, clean sheet with a barely visible vertical crease.

From the estate of Wolfgang Sawallisch. 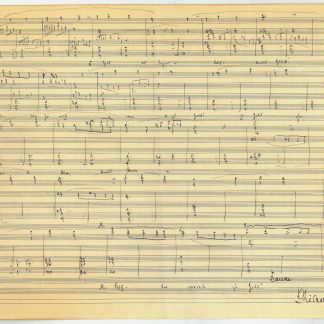