With Arabic quotations from the Qur'an

First edition of this important polemical work by Guadagnoli (1596-1656), the first Italian to teach Arabic and Syriac at La Sapienza and one of the correctors for the enormous Arabic Bible which the Propaganda Fide press began work on in 1632. The present piece of theological disputation was "launched against the Safavid scholar Ahmad b. Zayn al-'Abidin. This fascinating dispute was provoked in the first instance by the anti-Muslim tract penned by the Navarrese Jesuit Jerónimo Javier [...] That work found its way to Safavid Persia, where Ahmad b. Zayn al-'Abidin wrote a polemic response that refuted Christianity; he sent it to Rome in hopes that his arguments would convince the Pope. Scholars in Rome, among them Guadagnoli, studied the Safavid text and prepared their own refutation of it, which was published in the Roman presses of the Congregation [...] The work enjoyed wide circulation and reached the Muslim East; we known that it was wielded as a tool of religious propaganda at the court of the Great Mughal, and that years later, in the eighteenth century, an occasional Christian missionary would study it as a valuable resource for religious disputation with Muslims [...] The 'Apologia' contains, for example, quotations from the Qur'an that are written in Arabic and always accompanied by Guadagnoli's own Latin translation [...] The 1631 [first] edition is intensely anti-Islamic and full of ad hominem attacks on the Prophet, while curiously the 1637 version shows an evolution toward a somewhat greater respect for the religion" (García/Rodríguez).

Binding a little loosened. Lightly browned and brownstained throughout, title-page somewhat more strongly. Lacks the lower margin of a2; repairs to the inner and outer margins of A3 (insignificant loss to text). 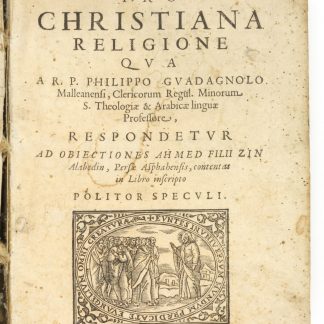