"An Offering to Muslim Warriors": The First English Translation of a Treatise on Early Modern Jihad

First English translation of the Tuhfat al-Mujahidin ("An Offering to Holy Warriors") by the scholar Zain al-Din al-Ma'bari, written in Arabic around AD 1583 in response to the Portuguese attacks on Islamic territories on the Malabar Coast. Rowlandson's translation, with footnotes in English and Arabic, seeks to provide a commentary on both al-Ma'bari's important historical account of the struggles against the Portuguese invaders and his understanding of the Islamic doctrine of Jihad.

As later historians have attested, the Portuguese showed little mercy in their Middle Eastern and Indian campaigns: Robert B. Serjeant (The Portuguese off the South Arabian Coast [1963], p. 30) particularly noted "the cruel, ruthless, and insulting attitude of the Portuguese towards the Muslims" during this period. The "Tuhfat al-Mujahidin" thus explores al-Ma'bari's justifications for a Holy War: in this case, because the Portuguese have occupied Muslim territories; killed or forcibly converted Muslims; and raped Muslim women in order to produce Christian children. Chapter I, "Regarding certain Divine Commands, wherein War against Infidels is enjoined. Treating, also, of the Reward that shall await that Act of religious Duty", lists the merits of Jihad as specified in the Qur'an and Hadiths. Chapters II-IV give an outline of the history of Islam in Malabar from the very earliest Muslim settlements on the Malabar coast, established by Arab emigrants around 710 AD; the development of trade through seaports established by Muslims; and the treatment by local Hindu rulers of their Muslim subjects. Chapter IV gives a complete history - one of few Asian sources to do so - of Portuguese incursions into Islamic territory from the storming of Jeddah in 1517 AD to the conquest of the Malabar Coast.

GAL II, 416 (p. 548). OCLC 6830733. Cf. "The Impact of a Sixteenth-Century Jihad Treatise on Colonial and Modern India" in Kendall & Khan (eds.), Reclaiming Islamic Tradition: Modern Interpretations of the Classical Heritage (2016); Amer, "The Rise of Jihadic Sentiments and the Writing of History in Sixteenth-Century Kerala", in: The Indian Economic & Social History Review 53 (2016); and Christian-Muslim Relations: A Bibliographical History Vol. 7, pp. 883-887. 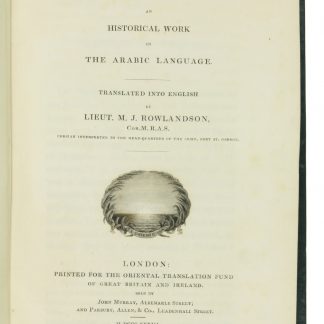