With the painted arms of Pope Innocent VIII, heightened in gilt

First edition of the commentary of Innocent IV on the Decretals of Gregory IX (known as the Liber Extra), one of the most important collections of medieval canon law. A handsome copy in a contemporary binding. Innocent's commentary was completed ca. 1251 and was never superseded. Beautifully printed by Heinrich Eggestein of Strasbourg; "le plus beau livre que cet imprimeur ait produit" (fin-de-siècle catalogue note pasted to first blank). Like a handful of other copies, the present copy contains the Apparatus only and was bound without Baldus de Ubaldis's "Repertorium super Innocentio" (an index to Innocent's work) which, although a separate work, seems to have been intended to form part of the edition.

Provenance: 1) painted at the foot of the first page by an accomplished contemporary (German?) artist are the arms of Pope Innocent VIII (1484-92), flanked by two coats of arms, one resembling a printer's device, possibly signifying an intended gift by an unidentified German scholar to the Pope in the 1480s or early 1490s. 2) Late 16th century ownership of Konrad Fuchs von Ebenhofen zu Saldenburg, a Tyrolean nobleman who acquired the Bavarian demesne of Saldenburg in 1587 and died on 14 January 1614 (his inscription "Conradt Fuchs" under the arms and "Fuchs zu Saldenburg" on front pastedown). 3) Owned by the Marquis de Villoutreys in the later 19th century (bookplate of the Bibliothèque Du Plessis-Villoutreys on pastedown). The Villoutreys family occupied the castle of Bas-Plessis in Chaudron-en-Mauges (Maine-et-Loire) from 1666. The castle was largely destroyed by fire in 1794 during the French Revolution; the central neoclassical section was erected in 1845, and a wing added in 1875 to house the Marquis’s library. When restoration began in 1982, the castle’s library was transferred to the Université Catholique de l'Ouest, and then to the Bibliothéque des Archives Départementales du Maine-et-Loire. The present incunable left the Villoutreys' library for an unidentified private collection at some time prior to this transfer. 4) British private collection. 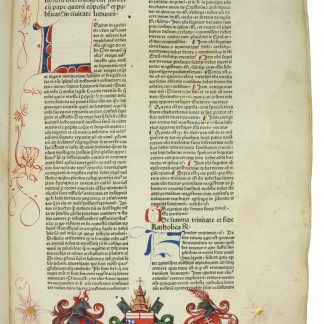