In German, to the Austro-American journalist and founder of the Jewish Telegraphic Agency in New York, Jacob Landau (1892-1952), concerning a book by the Argentinian writer Dardo Cúneo (1914-2011), whose attempts to "draw a closer analogy between physical and sociological-political terminologies" Einstein politely dismisses: "I should not wish to dishearten the author, but similarly would not wish to encourage him against my own convictions to cultivate these fallacious analogies [...]".

The socialist Cúneo, an opponent of Peron, president of the Argentinian Writers' Union, director of the Argentinian National Library, and active publicist, repeatedly analyzed the socio-political phenomena of his age under the impression of the dramatic political developments of the first half of the 20th century. The book to which Einstein refers is likely José Martí's "Estados Unidos. Prólogo, ordenación y notas de Dardo Cúneo" (Buenos Aires, 1944). 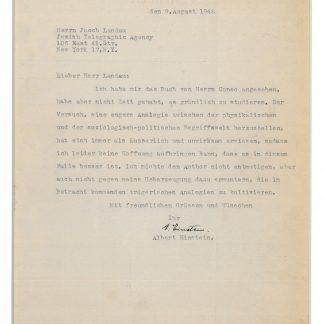