[Australia - Pilot Guide]. The Australia Directory; Volume I. Containing Directions for the Southern Shores of Australia, from Cape Leeuwin to Port Stephens, including the Bass' Strait and van Diemen's Land.

Rare first edition of this Directory for the Southern and Eastern coasts of Australia, including Van Diemen's Land (Tasmania). The introduction stresses the necessity for collecting and presenting as much information as possible especially for such remote and unknown areas as Australia. The book tries to put together the principal sources available, such as Captain Flinder's original survey, and Captain Kins's subsequent examination of various parts of the coast, as well as the results of the voyages of the French officers D'Entrecasteaux and Freycinet, and the reports of Lieutenant Jeffreys. 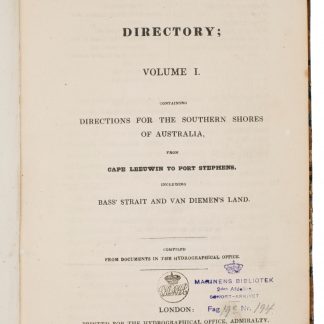 You're viewing: [Australia - Pilot Guide]. The Australia Directory; Volume I. Containing Directions for the Southern …London, 1830. € 650.00
Add to cart