One of the earliest accurately illustrated herbals, with about 320 beautiful woodcuts

Folio. [10], 306 ff. With about 320 mostly botanical woodcuts in the text (3 botanical illustrations repeated on the title-page and a few of the non-botanical illustrations including repeats in the text), about 70 woodcut decorated initials plus a few repeats (4 series, the largest pictorial and the others white on black, often with multiple blocks for the same letter), many cut by Sebald Beham. Set in roman types with Greek and Schwabacher for the Greek and German names. 16th-century sheepskin parchment (extensively reworked), sewn on 5 supports.

First edition of Theodor Dorsten's Latin adaptation of Eucharius Rösslin's extensive and beautifully illustrated German herbal, Kreutterbuch, first published (also by Egenolff) in 1535. It includes about 284 botanical illustrations originally cut for the Rösslin edition, many based on the pioneering naturalistic illustrations cut by Hans Weiditz for Otto Brunfels's Herbarium vivae eicones (1530-1536). Most show complete plants including roots, some show fruits or other parts of plants, and about 36 mostly smaller woodcuts (including a few repeats) show containers for the medicines or other relevant objects. Egenolff clearly saw the importance of the new and more accurate style of illustration, and engaged the best woodblock cutters to produce his blocks. While Brunfels's Herbarium had no text beyond the names of the plants, Egenolff saw the importance of combining the images with detailed botanical medical texts, first in German by Rösslin and here in Latin by Theodor Dorsten (1492-1552), a physician and professor in Marburg, Germany. The book therefore played a considerable role in bringing botanical medical knowledge to a wider public, both in Germany and abroad. Dorsten's adaptation was also further developed in German for Adam Lonitzer's Kreutterbuch in 1557. The present first edition of Dorsten is a nice piece of book production, the roman type (following the "Venetian" style of Nicolaus Jenson, but in the variant form prevalent north of the Alps) perfectly complements the woodcuts, and the presswork is excellent. The present edition appeared in two simultaneous issues, the present issue repeating three of the botanical illustrations on the title-page and the other instead showing Egenolff's woodcut burning heart device (USTC 616902 & VD16 D2443): most catalogues do not distinguish the two.

Signed above the colophon by "Remigius Ruffius" (Rémy Roussel), a French humanist active 1517-40. He is said to have come from Loudun and been active in Paris; we suppose he is the canon of that name recorded at Tours, near Loudun, in 1539. With the title-page somewhat worn and with a small hole restored, a few small worm holes in the first few leaves (1 in the head margin continuing through the first third of the book), but still in very good condition. The binding has been extensively restored but is now structurally sound. First edition of one of the earliest herbals to provide scientifically accurate botanical images. 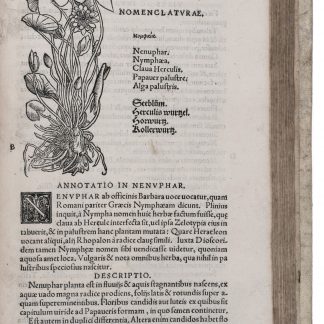