8vo. (24), 168, 26, (5), (1 blank) pp. With woodcut device on title-page and a woodcut portrait of Rondelet at the last page of the preliminaries. Contemporary limp sheepskin parchment.

Very rare first edition of an early pharmalogical book by the famous French phycisian, naturalist and botanist Guillaume Rondelet (1507-66), professor at the university of Montpellier, best known for his work on fishes De piscibus marinis (1554), the standard work on ichtyology for over a century. He was a good friend of Rabelais, whose character Rondibilis is said to be based on Rondelet, and among his students appear prominent names such as Clusius, Lobel, Gesner and Belon. The present work primarily deals with weights and measures used in medicine, with at the end a 26-page index with about 35 entries per page, listing both herbs and medicines. A second edition was published a year later by Plantin, followed by other editions in 1563 and 1564.

With owner's inscription of Pierre Gauthier (late 19th century?) on flyleaf. Waterstain at the head and fore-edge margin and the binding slightly soiled and rubbed along the extremities, otherwise in good condition. 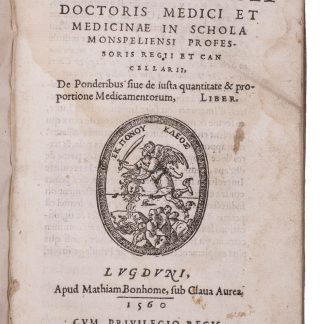